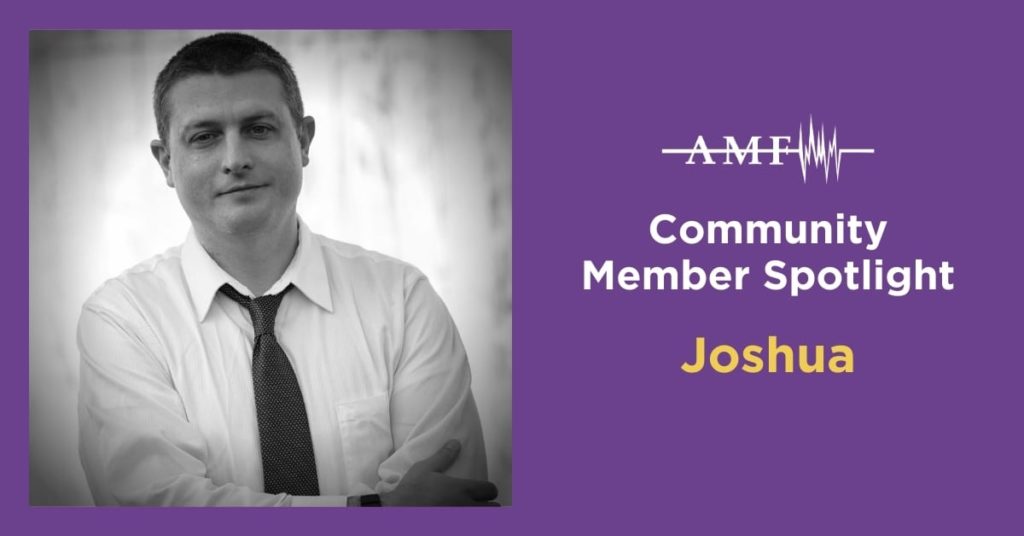 A Father Living with Chronic Migraine

Joshua Dyer, father and indie author, shares his experience with chronic migraine and his advice for others

Along with painful headache attacks, Joshua Dyer began experiencing symptoms of memory loss, chronic fatigue and habitual yawning in 2014. A year later, he received his diagnosis of chronic migraine from his neurologist and began receiving treatment for migraine. Joshua spoke with the American Migraine Foundation about the disease’s impact on his life and work. He also talked about the importance of reaching out to others with migraine.

Life with “an invisible demon”

Chronic migraine affects Joshua’s ability to function like a “typical” human being. He says that every day is a battle to keep the dull pain of migraine in the background.

Each person with migraine, whether episodic or chronic, experiences attacks differently. For Joshua, his chronic migraine attacks include bad head pain that is accompanied by visual aura. His speech, balance and memory are also affected. “When an attack breaks through, my speech slurs, my vision bursts with thousands of little lights, and I sometimes lose my balance. If that wasn’t enough, my memory goes to garbage, too,” Joshua explains. During an attack, he also struggles to think clearly.

Joshua’s migraine symptoms affect his job and his family. During an attack, he is unable to work, play with his children or enjoy his hobbies. Sometimes he falls asleep mid-sentence while talking to his wife and children. He also experienced the embarrassment of slurred speech and balance difficulty when around coworkers. “It’s humiliating to be perceived as something you’re not because of an invisible demon inside,” Joshua says. “You can’t go into the sun. You can’t enjoy a film. You become a slave to the darkness.”

An avid reader and an indie author, Joshua struggles to do either when he has an attack. He has a hard time getting his eyes to focus or remembering what he wrote from one line of text to the next. “This thing has taken over my life, an invisible master,” he says.

Finding hope through community and advocacy

There are treatments available that help reduce migraine pain and lessen the number of attacks. But there is still no cure. Joshua compares the lack of a cure to living in a cage with no escape. But taking medication prescribed by his neurologist helps Joshua gain some sense of “hope and normalcy” living with chronic migraine. In addition, he learns to manage his triggers effectively.

Joshua Dyer finds hope, strength and community in reaching out to others with this disabling disease. “Knowing you’re not alone is a huge burden lifted. Talking to others that live the same reality can be a comfort,” he explains. Migraine is an invisible illness with symptoms others can’t see. So those who experience it often find others’ lack of understanding about it frustrating. It makes them feel alone with their symptoms.

For Joshua, sharing his migraine story is about helping others with migraine see that they aren’t alone. At the same time, it’s also reducing stigmas about the disease. “This is a genuine disease. It cripples and humiliates you. It makes you feel like less of a person, lost and incomplete. I hope this finds you, so you, too understand that you’re never alone,” he says.

After living with migraine for so long, Josh has two pieces of advice for others in his situation. First, build your support network. Having a supportive network of friends or family who can check in during an attack and empathize with what you’re going through can help you better manage the pain of an attack and feel less alone. His second piece of advice is to educate yourself. “Learn what you can about your migraine. They’re different for all of us,” he says.