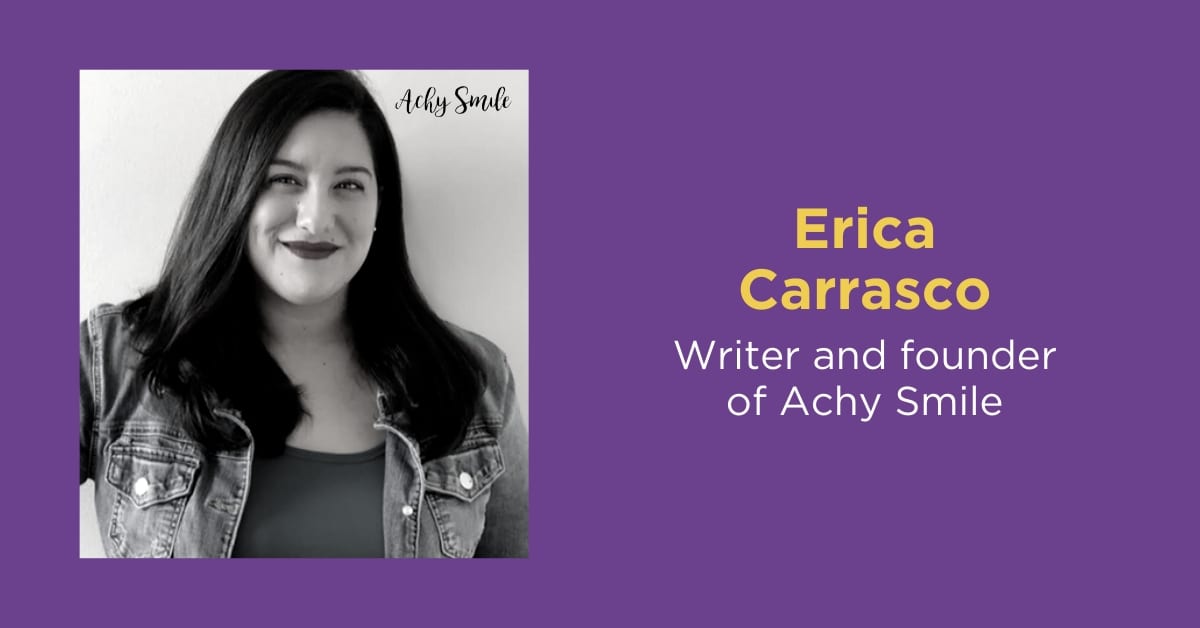 Migraine advocacy takes many forms. There are real people behind this disease, each with their own lives and passions. In an effort to make a difference, some people take their skills or abilities and use them to help others living with migraine. One of those people is Erica Carrasco.

As a writer and person living with migraine, Erica saw a unique chance to help advocate for the migraine community. Her experiences led her to start Achy Smile, a blog where she catalogs her life and treatment efforts.

“I smile all the time whether I feel good or not,” she says. “It’s just so natural for me to smile, even though I’m always in pain somehow. That’s kind of where I came up with the name Achy Smile. That’s where the blog started.”

Achy Smile is a partner of the American Migraine Foundation. Erica recently sat down with AMF to talk more about how blogging has helped her cope with migraine and create a community where others don’t feel so alone.

Erica started experiencing severe migraine symptoms in 2004. Prior to Achy Smile, Erica’s migraine was making life difficult and affecting her emotions. She began to see a therapist, who suggested that she start keeping a journal to help her process how she was feeling.

“I’m not really good with handwriting, my hands hurt pretty easily,” she says. “For me, typing is easier than handwriting. So I figured I would just do a blog because it’s kind of my outlet. It wasn’t anything that I was advertising or anything like that—I kind of just started a blog for my own purpose, but I figured I could share it. If anybody reads it and it helps them or they can relate, then great.”

While Erica’s original mission was to create something more personal, Achy Smile became a more-involved project as time went on. She started an Achy Smile Facebook page and began sharing her articles with a wider audience, eventually moving on to other forms of branded content and connecting with people in other meaningful ways.

“My mission turned into advocacy without me even realizing what I was doing,” she says. “So, after a while, it kind of just became its own entity. I started making t-shirts and opened an Achy Smile shop. Now I make shirts, hoodies, mugs and all kinds of things just to help spread migraine advocacy.”

Speaking Up for Women with Migraine

One of Erica’s biggest drivers is the fact that migraine is more common in women than in men. She points out that one of the reasons why migraine may not be taken as seriously as it should be has to do with gender bias.

“I had a really tough journey trying to get a diagnosis and being taken seriously,” she says. “Migraine primarily affects women, and we’re seen as complaining and nagging. That stigma has been there for as long as migraine has been around, I think.”

While this problem affects women, Erica says that it doesn’t make it any easier for men.

“Men are having a tough time because they’re being told, ‘Oh, you’re just acting like a woman,’” she says. “To be told to ‘push through it,’ that is tough to hear.”

While Erica does not work full-time anymore due to her migraine, this doesn’t mean she’s limited in what she can do. Achy Smile, she says, is the job that she created for herself. She takes pride in the work that she’s done, helping to give people hope and a sense of community.

“If you ever go to my blog and go to the comment section of the different articles, you’ll see that people are like, ‘I feel exactly like this,’ or, ‘Wow, I didn’t know anybody else was dealing with these symptoms,’” she says.

The most important thing Erica says she wants people with migraine to know is that it’s important to accept that it is a part of their lives.

“Acceptance for me is not giving up,” she says. “It’s accepting what you’ve been given in your lifetime, learning how to live with it and moving forward. It’s about enjoying your good days and taking care of yourself on the bad days. For me, that is the most important part of migraine.”

Achy Smile fights alongside the American Migraine Foundation to improve the lives of those living with this debilitating disease. To learn more about the wonderful people and organizations working with AMF, check out our Partner Program page. Together, we are as relentless as migraine.