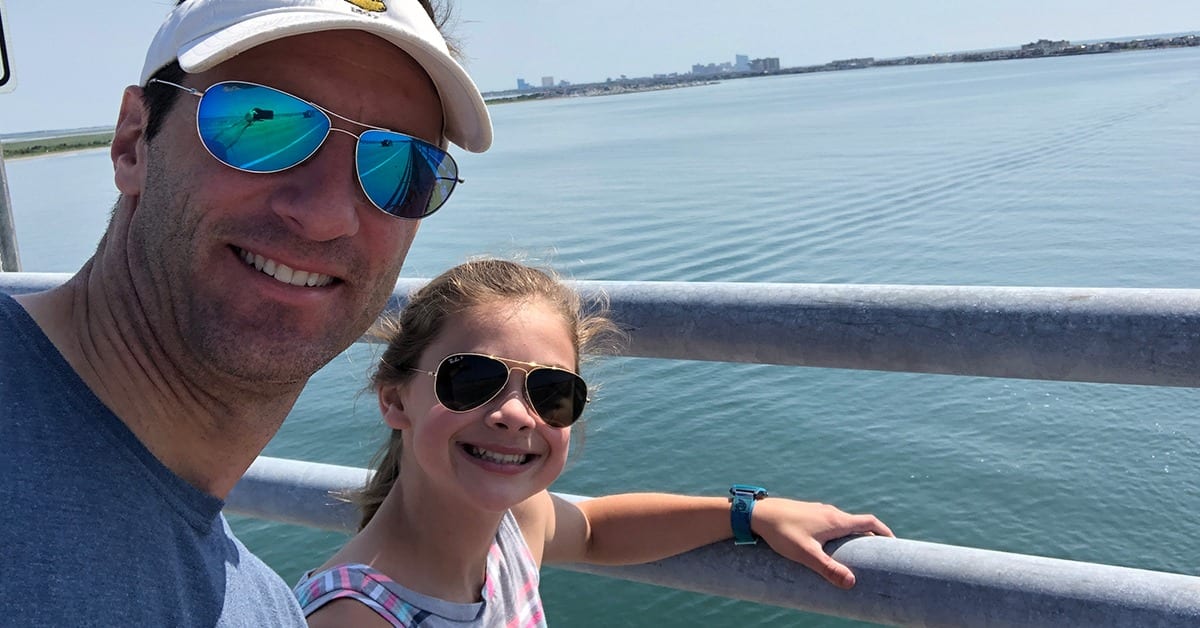 The disabling aspects of migraine can take a toll on even the toughest individuals. But 12-year-old Lexi DiMarino is determined to never let migraine stand in her way, even on the most excruciating days. Lexi has been living with migraine she was six years old. In that time, she has learned how to manage her condition and keep it from overtaking her life—and the fight against it has made her stronger.

“Migraine has definitely challenged me and pushed me to be the person I am now,” she says. “It’s taught me how to stay positive.”

Now, Lexi wants to take what she’s learned and help other kids living with migraine. Alongside the American Migraine Foundation, Lexi and her father, Keith DiMarino, have made it their mission to spread the word about pediatric migraine. By featuring Lexi’s story as part of AMF’s Times Square ad campaign, among other advocacy efforts, the DiMarinos aim to empower other kids with migraine—and their parents.

Searching for a Diagnosis

While Lexi’s diagnosis is relatively recent, listening to her describe her journey makes it sound like a story years in the making. Despite presenting symptoms of migraine, Keith says that the DiMarinos saw a number of different doctors and specialists—and made several emergency room visits—before ultimately ending up at Children’s Hospital of Philadelphia. CHOP is where Lexi was finally diagnosed with pediatric migraine and was able to begin treatment with help from Donna Stephenson, MD.

Like most other kids, Lexi plays sports and likes to hang out with her friends. But migraine sometimes makes it hard to participate in the same activities as everyone else.

“It made it harder to see friends that I wanted to see because my head hurt,” she says. “It definitely made it harder to study for school because I wouldn’t be able to focus and concentrate on the things I was trying to do. It also made sports more difficult, because it would get worse when I did physical activity.”

Keith points out that even with modern technology, socializing is not simple for children with migraine.

“Kids text each other, and just looking at a screen when you have migraine is painful,” he says. “So communication gets really limited. Even being able to text or FaceTime a friend is difficult. It can make you feel alone. It makes it hard to have a social life.”

But this hasn’t stopped Lexi from staying active and explaining migraine to her friends, who she says are good at trying to empathize—even if they don’t fully understand what migraine is or how it affects her. Keith also points out that Lexi’s mother and grandmother live with migraine, making her family better positioned to understand.

As a parent of a child with migraine, Keith has dealt with hard emotions that come with his daughter’s diagnosis. But along with that comes the inspiration he feels seeing Lexi take migraine head-on—something he considers to be a “silver lining” given the circumstances.

“She stepped up; she was strong,” he says. “She would work out with migraine. She would go to the gym and eat right, and she was listening and paying attention to what she needed to do. I know we don’t think that kids are always listening or paying attention to us, but she was really observant and she really took it on her own.”

It was this kind of drive that inspired Keith to run the Rim to Rim to Rim event, a grueling trek across the floor of the Grand Canyon. A friend of Keith’s asked him to participate, and he initially declined. But after watching Lexi work out at the gym one afternoon and seeing her power through her migraine, Keith suddenly realized that he could push himself to make the hike.

“I think when you have a challenge in your day and you see somebody whose day is way harder than yours, you realize that challenge probably wasn’t that big,” he says. “It really puts things into perspective, and that was happening with me.”

Few people are able to complete the Rim to Rim to Rim, but Keith managed to overcome the journey—and did so while raising awareness around pediatric migraine.

Teaming Up With AMF

The DiMarinos’ advocacy efforts aren’t limited to Keith’s quest across the Grand Canyon. Keith and Lexi have also gotten involved with AMF.

“They’re really moving the ball forward, and I think that’s really encouraging,” Keith adds. “I think they’re brilliant in what they’re doing—it’s like another level over there. They’re not just spreading awareness, they’re impacting change.”

Their relationship with AMF evolved, ultimately leading to Lexi’s picture and story being shared as part of AMF’s Times Square ad campaign.

“I feel like that’s a really huge step in the right direction, and helps kids to know that they’re not the only ones going through this,” Lexi says of being featured in Times Square. “I’m really excited that I get to be on that billboard to help other kids realize they’re not alone in what they’re going through.”

Keith and Lexi both point out that there is little information available about pediatric migraine. Not only for the general public, but in schools, as well. Many educators do not know how to deal with migraine among their students, despite the statistics indicating that some of their pupils probably experience it.

“I hope that we can figure out more effective ways to treat these migraines in kids, and I’m hoping we can teach kids how to treat and prevent migraine,” she says. “I would tell other kids with migraine to never give up. Try to stay positive. You are not alone in this.”

To learn more about pediatric migraine, visit the American Migraine Foundation resource library. For help finding a specialist in your area, check out our Find a Doctor tool.