Public Figures Speak Out About Migraine 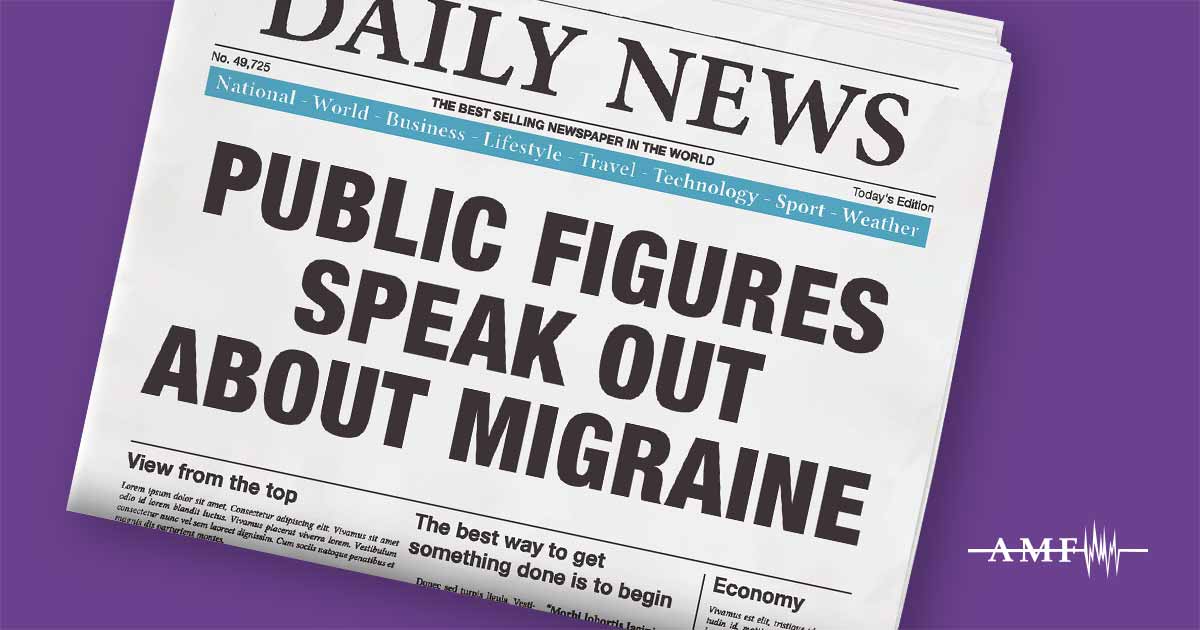 Migraine is one of the most common neurological disorders in the world, affecting 1 in 7 people. Despite the impact, conversations about migraine often happen in private, between doctors and patients or in online support groups where people living with this disabling disease find solace.

A growing number of public figures such as Jim Cramer and Whoopi Goldberg are speaking out, disclosing that they are one of the 39 million Americans who face migraine every day. For American Migraine Foundation Chair Dr. Lawrence Newman, this has the potential to change the way millions view the disease.

“Public figures who are willing to speak up and speak out about this disease will inspire those who battle it, empower those who live with its stigma, and hopefully shine a light on what migraine is,” says Dr. Newman.

The Foundation launched the Move Against Migraine campaign in 2017 to empower those living with migraine to advocate for themselves to find the care and support that they need. In 2019 Jim Cramer, host of CNBC’s Mad Money, joined the Foundation as its official chief spokesperson, using his incredible platform to share his migraine story and direct people to doctor-verified information and resources.

“Public figures can draw attention to the impact migraine has in a way that few others can,” says Dr. David Dodick, Immediate Past Chair of the Foundation. “They also provide hope for all that can be accomplished in spite of migraine and are a testament to the resilience of those impacted.”

Foundation Secretary Deborah Henscheid Lorenz views this high profile acknowledgment of migraine as an important turning point for the community. “Historically, public figures have been resistant to share their experiences living with migraine,” she says. “This has created the perception that public figures and celebrities are able to achieve their success because they do not live with migraine and people who live with migraine cannot expect to achieve such success because migraine is holding them back.”

However, as more and more public figures share their migraine stories, the perception fades and a brighter truth is revealed: A successful and fulfilling life is possible for those living with migraine.

Actor, comedian and television personality Whoopi Goldberg revealed to the world in early 2021 that she had lived with migraine for over 40 years. She spoke frankly with Self magazine about the physical and mental toll that the disease took on her, from the excruciating pain to the constant fear: When will the next one strike? Her experience mirrors that of so many men, women and children living with migraine. By sharing both her struggles and triumphs with migraine, Goldberg normalizes the entire migraine experience.

Jim Cramer, host of CNBC’s Mad Money, joined the American Migraine Foundation’s Move Against Migraine Campaign as chief spokesperson in 2019. Mr. Cramer is one of the more than 39 million Americans living with migraine. Despite having access to top physicians in the country, it took Mr. Cramer years of debilitating attacks to receive a diagnosis and find a treatment plan.

“There are headaches and then there is migraine. And the latter is nothing like the former. Unless you have migraine, you don’t know what it’s like to fear an attack,” he shared with us. Listen to Mr. Cramer’s migraine story.

In 2013, businesswoman and philanthropist Cindy McCain launched the 36 Million Migraine campaign with the American Migraine Foundation to raise funds for migraine research. Mrs. McCain had lived with migraine for decades, but only received an accurate diagnosis at age 40 after years of being disbelieved. She appeared on NBC News to kick off the campaign and shine a light on the indescribable pain and stigma that those living with migraine experience.

“A large part of this is the stigma. People are afraid to talk about it, if they do, they’re misdiagnosed, their coworkers think they’re faking it, their family think that they’re faking it… it’s terrible.” Watch the full interview segment here.

The American Migraine Foundation is committed to improving the lives of those living with this debilitating disease. For more of the latest news and information on migraine, visit the AMF Resource Library. For more on advocacy and ways that you can get involved, please visit our Advocacy Hub.

How You Can Advocate for Migraine this June and Beyond
How You Can Mobilize for Migraine and Headache Awareness Month this June
IHS-GPAC Recognizes Fujitsu Workplace Migraine Education Program
Headache on the Hill 2022
Recapping the Emerging Advocate Program 2021
Celebrating Another Year of Groundbreaking Migraine Advocacy and Research
American Migraine Foundation Welcomes New Board Members
How Should We Define Chronic Migraine?
Mobilizing for Migraine and Headache Awareness Month 2021
5 Takeaways from the Migraine State of the Union