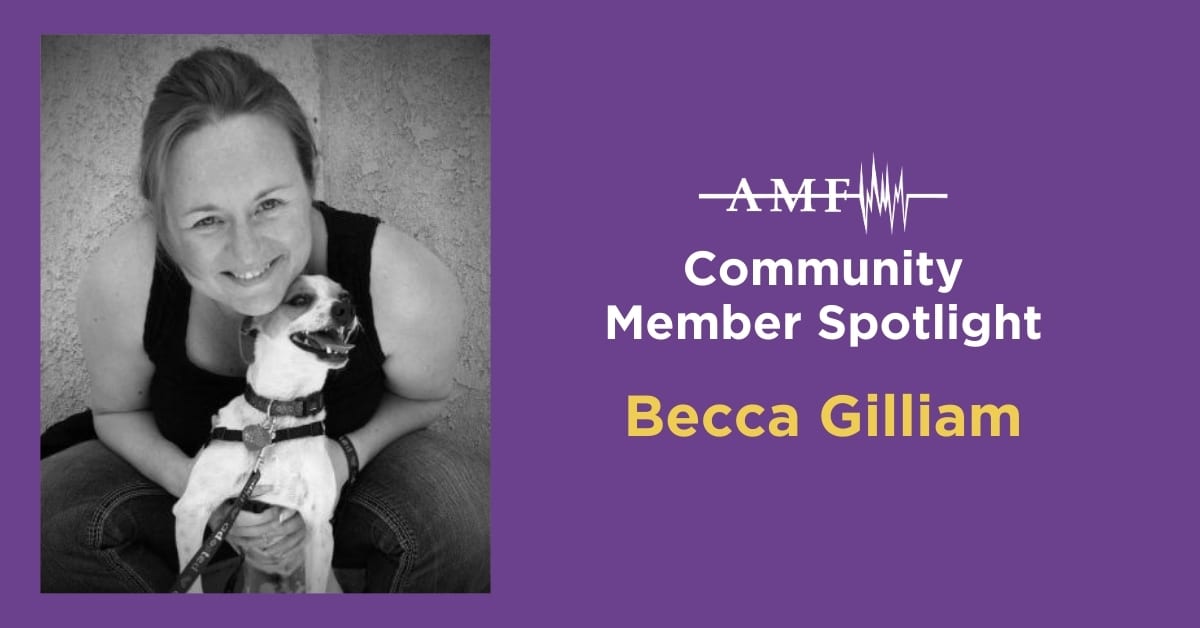 Becca Gilliam has lived with migraine for so long that it’s part of almost every memory. She vividly recalls being at a birthday party when a debilitating migraine attack hit. Even all these years later, she remembers having to ask her son to pick her up because she couldn’t drive. She also once explained to guests that she wasn’t having a stroke, that this was “normal.”

“It feels like some painful, dramatic production that you have no say in,” she says, “It kind of plays out in front of you and at you simultaneously.”

Becca remembers having her first migraine attack at 7 years old. She would often experiencing headaches severe enough to induce nausea and vomiting. Her attacks became more frequent as she went through puberty, and just before her 40th birthday, Becca was diagnosed with hemiplegic migraine, a rare type of migraine that comes with weakness on one side of the body in addition to head pain.

Migraine has impacted every area of her life, including her relationships, work and finances. She talked to us about how she remained persistent, practiced self advocacy and dealt with discrimination at work.

Migraine Discrimination in the Workplace

Becca worked in an office job in the fashion industry—a job that became more stressful after her diagnosis. Becca faced migraine discrimination, but she also felt pressure to perform on a higher level because she had a disease. The facial and limb paralysis she experienced during attacks made people uncomfortable. Her colleagues, even those with whom she had worked for 11 years, stopped talking to her. Becca says the most painful thing was that some of her colleagues accused her of faking it even though she had documentation from her doctor. “Many of those who saw what was happening to me physically and did believe me, viewed me as a liability and suggested I take leave until I could make the hemiplegic migraine attacks go away.”

Becca felt stuck. “Would I be able to find another job with my condition,” she wondered. ”Or would I be forced to collect disability benefits, knowing it would be impossible to pay my bills?”

After dealing with this treatment for two years, Becca found the courage to quit. Stress is her top migraine trigger, and quitting allowed her to break the negative cycle of stress and migraine. The effects were almost immediate: Her monthly number of migraine attacks dropped by 80%. Shortly after, she was able to find an amazing job at a company that didn’t overtly or subtly discriminate against people with disabilities. They also had a supportive environment.

The discrimination she experienced drove Becca to promote self-care and raise awareness about migraine by sharing her story. “I would love to help make changes in how we treat ourselves in managing this and hopefully avoid depression,” she says. She shows herself grace by letting go of expectations and has learned to set boundaries in order for her to improve her quality of life.

Becca has also created a migraine support team, including her doctor, her immediate family, “the world’s best aunt” and a best friend who also has migraine. She’s grateful for her doctor because they also live with chronic migraine and can empathize with parts of her experience. “That doesn’t mean that I don’t need to be proactive in my care,” Becca says. “I’m still my best advocate.”

She encourages other people in her position to not lose themselves to the disease. “You are not an inconvenience,” she says, “You are a person learning how to manage your migraine, not a person with migraine that needs to be managed.”

She also encourages people to persevere and find a treatment that works for you. “Keep trying, whether it’s medicinal, physical or therapeutic because your life is absolutely worth it,” she says.

Addressing migraine at work through a migraine management program can benefit employees and business owners. If you would like your place of employment to be considered for a migraine in the workplace education program, please email us at [email protected] or connect us to your human resources department.