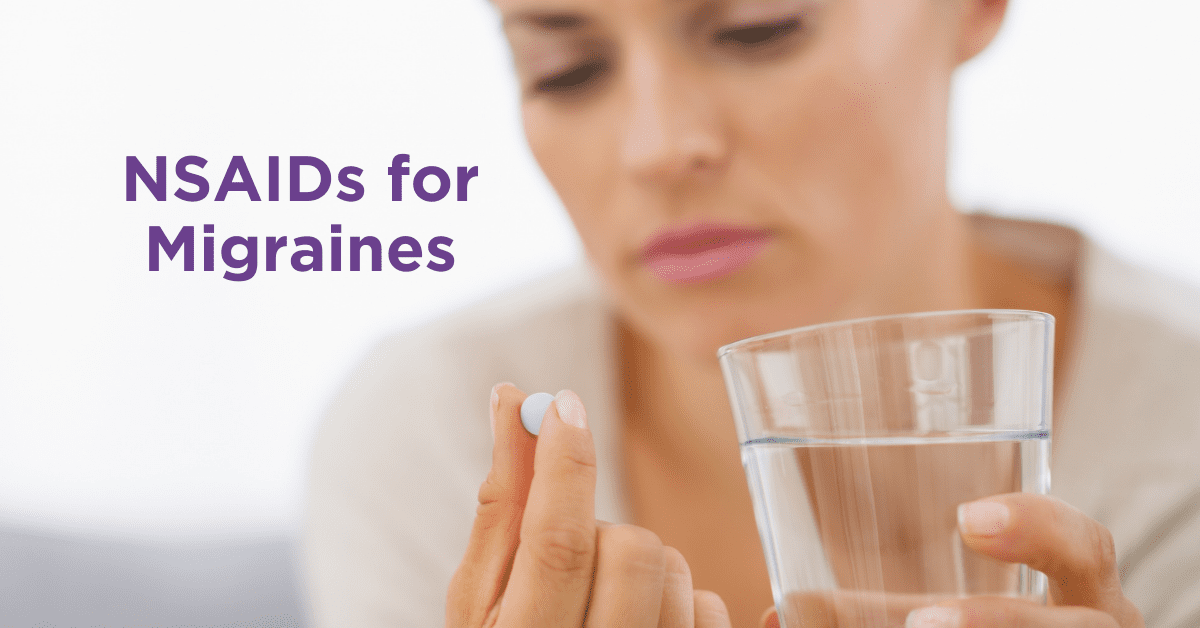 Learn how NSAIDs work, how they compare to triptans and other migraine treatments and who should use NSAIDs.

Triptans have received more promotion and attention since they first became available for migraine in 1990. But NSAIDs have long been a mainstay for migraine management. NSAIDs stands for non-steroidal anti-inflammatory drugs. These drugs are treatments for migraine that block processes that can lead to attacks. Let’s dive into what that means.

What are NSAIDs? How do they work?

Indomethacin (Indocin®) is another FDA-approved NSAID widely used for the treatment of migraine and other primary headache disorders like hemicrania continua, and Cambia®—a powdered formulation of diclofenac potassium that is dissolved in water and taken as an oral solution—was found to be effective in treating moderate to severe acute migraine in two large clinical trials.

There is also evidence that aspirin may be an effective migraine treatment. You can take aspirin either in pill form or dissolvable form for faster absorption by the body.

How do NSAIDs compare with other migraine treatments?

Triptans are usually the first treatment recommended for moderate to severe migraine attacks in patients. NSAIDs may be recommended for people with mild, non-disabling attacks or for patients who can’t take triptans.

NSAIDs are sometimes less expensive than triptans. In the few studies that have compared a particular NSAID with a triptan, the NSAID has performed at least nearly as well.

Co-administration of an NSAID and an oral triptan may be more effective than taking either drug alone. There is also a prescription oral medication available that combines an NSAID (naproxen sodium) and a triptan (sumatriptan). Always talk to your doctor about all medications you are taking, even if they are non-prescription, to avoid possible drug interactions or compounding side effects.

Most NSAIDs can lead to medication overuse headache if used more than 10 to 15 days per month.

Side Effects and Contraindications

Virtually all NSAIDs may irritate the lining of the stomach or intestines. This can be a problem for individuals with peptic ulcer disease, acid reflux (GERD), irritable bowel syndrome or other gastrointestinal disorders.

Heartburn and diarrhea are common side effects of NSAIDs, and fluid retention may also occur. However, this generally does not happen with occasional or “as needed” usage).

In rare instances, NSAIDs may impair the kidneys or liver, but this is much more likely to occur in individuals who take an NSAID on a daily or near-daily basis.

NSAIDs can also increase the risk of heart attack and stroke, so patients with a history of these conditions should speak to their healthcare provider before taking NSAIDs. Combining NSAIDs with SSRIs may increase the risk of stomach bleeding. In addition, people who take blood thinners can’t take NSAIDs.

Who is a good candidate for NSAIDs for migraine treatment?

Some people find NSAIDs to be consistently effective, even for migraine of moderate to severe intensity. However, these drugs typically are more useful when taken early in the migraine attack.

Be sure to discuss with your doctor whether you are a candidate for using NSAIDs to treat your acute migraine. It’s a good idea to talk about any medications, supplements, vitamins and non-medication treatments you’re using. That way, your doctor has a full picture of your migraine management.

Of course, those with contraindications should avoid using NSAIDs. Otherwise, if used moderately and taken at an appropriate time, these medications can be a valuable part of a migraine treatment plan. This is especially true when used in combination with lifestyle changes to help reduce or prevent migraine symptoms.