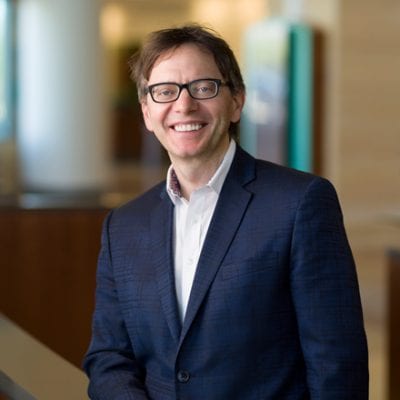 Move Against Migraine: An interview with Dr. Dodick

With Migraine Awareness Month around the corner, we sat down to speak with Dr. David W. Dodick, MD, FRCP (C), FACP, FAHS, the Chair of the American Migraine Foundation (AMF), President of the International Headache Society, and Professor of Neurology at the Mayo Clinic in Arizona. He shared that the kickoff to the American Headache Society meeting will include a Move Against Migraine Thunderclap on June 8 (to sign up, just click on the link). This crowd-speaking platform will mass-share a single message on social media channels (Facebook, Twitter and Tumblr) and result in unified rallying cry that amplifies the voice of the migraine community. He also took some time to talk about AMF, their initiative, and the stigma that still exists within our society.

What is American Migraine Foundation and how does this organization support the migraine community?

American Migraine Foundation is a non-profit organization made up of a number of stakeholders including physician experts in the headache field as well as patient advocates. Our mission is two-fold: research and patient advocacy.

The research initiative includes the development of a multicenter U.S., and soon global, patient registry that compiles detailed information on patients seen in medical clinics around the world as well as a biobank (in this case of blood) that could be used for future research. We hope to develop a better understanding of the genetics of the disease and be able to answer these questions: Why do some patients have remission and why do some have disease progression? Why do some patients respond to certain treatments and why do others have serious side effects and reactions? We want to be able to identify new targets for drug therapy that is more effective, specific, and safer than currently available treatments. Essentially, we are aiming for precision medicine (drugs specific for the disease in question) and individualized medicine (right drug for the right patient).

For our mission, of advocacy, we have our Move Against Migraine campaign.

What is your Move Against Migraine campaign all about?

We have envisioned this campaign for five years and it took the better part of three years to develop. We worked with advertising, public relations, and media partners to develop the creative content and dissemination plan for this campaign. Our objectives are to raise awareness and brand migraine as a neurological disease instead of a non-organic or psychosomatic illness. In so doing, we hope to remove the stigma that patients continue to live with.

Another objective is to bring patients together. When you mobilize a community of patients, good things happen. We’ve seen it with HIV and breast cancer for example. Patients can learn from one another, learn from experts in the field, and find experts near them who have experience in managing/treating migraine and other headache disorders, such as cluster headache. Plus, when we bring patients together, we can work with them to have them advocate for the disease – advocacy occurs on many levels starting with coworkers, family, and friends, but also reaches the medical community, the regulators who approve drugs and devices, the pharmaceutical industry developing new drugs and devices, and, importantly, the federal funding agencies who have historically not provided the funding support to clinicians and scientists to advance the treatment of migraine and other headache disorders.

In addition to the Thunderclap on June 8th, we also launched the Move Against Migraine Facebook Group, which is a forum for individuals with migraine and other headache disorders to share information and also allow experts in the field to regularly host Facebook Live events. For Migraine Awareness Month in June, we’re also having a Facebook Frame where migraine patients and supporters can update their Facebook profile picture to help spread awareness.

Also upcoming on the American Migraine Facebook page is the Facebook Challenge, which is launching on June 22 and lasting throughout the summer. It will feature 3 patients who will ask the migraine community “How do you move against migraine?” People can respond in a written reply or via photos or videos. It’s a great opportunity for the community to come together and make some noise.

“It’s not simply just a headache”

Why do you want to spread awareness? What do you feel people still don’t understand about living with migraine?

Unfortunately, migraine has been synonymous with the term “headache.” The word “headache” has become a euphemism for everything that is a nuisance in our life. Since it’s used flippantly migraine isn’t seen as a serious debilitating disease. The stigma is that migraine patients can’t withstand the stressors in life so they develop headaches. One of my patient advocates who sits on our foundation board said it best “One of the worst parts about migraine apart from the suffering is that people don’t believe you.” We need to change the conversation as it’s not simply just a headache. It’s a neurological disease that causes a multitude of symptoms and can affect every aspect of a person’s life. People with migraine are at risk of other serious disease such as stroke, depression, anxiety, and epilepsy. When you increase awareness it allows patients to stand up for themselves and advocate for themselves and others who suffer. Sometimes there is stigma even within a patient’ own family. It’s important for coworkers, bosses, and friends to be aware of how debilitating migraine can be. It’s important that physicians, especially primary care doctors where most patients receive their care, and neurologists to treat migraine with the seriousness that it deserves. Otherwise, we fail to provide care to tens of millions of Americans

As a neurologist, do you see the same stigma within the medical community as we do in the general population?

We’re seeing less of it but certainly when I was going into this field, many of my colleagues asked “Why would you do that? Why would you ruin a potentially promising career by studying something that’s not a neurological problem?” As we develop highly specific, disease-targeted, therapies, and as we learn more about the scientific and molecular basis of migraine, the medical community will begin to pay very close attention. Fortunately, that time has arrived and we are entering a time when the stigma and the lack of understanding will be a thing of the past. Some of the latest research in migraine, such as pharmacological and nonpharmacological treatment and disease epidemiology, will be presented at the upcoming American Headache Society Annual Scientific Meeting June 8-11 in Boston.

Combating the stigma within the medical field

How do you combat those stigmas?

The awareness campaign is how we’re trying combat that stigma as we can educate people about what we know about migraine. Most physicians who are being trained do not get education on some of the most common illnesses that affect people including migraine. Sometimes neurology isn’t even a required rotation in medical schools or post-graduate residency programs. Combating this stigma is twofold.

Looks at Autism Speaks. Fifteen to twenty years ago, autism was seen as a behavior disorder among kids who were behaving badly. With more understanding of the genetics and the mechanisms involved, it is a serious neurological disease. I think we can accomplish with Move Against Migraine what Autism Speaks did for Autism. It’s also going to take undergraduate education of students in medical school. Changing the medical school curriculum can be done at the local level when a local champion works to ensure that the medical school curriculum includes education and instruction on the science and treatment of migraine and other headache disorders. At a national level, the Accreditation Council for Graduate Medical Education (ACGME) sets and monitors the professional educational standards essential in preparing physicians to deliver safe, high-quality medical care to all Americans. Since 12% of the US population experiences migraine, it’s obvious that education around migraine and other headache disorders must be a part of the curriculum.

How do you suggest patients combat that stigma with their doctors?

By not apologizing. Patients do it with me even today, they apologize for being in my office. They’ve been intimidated for so long and feel like they’ve been complaining when there are “sicker patients” to be seen. Migraine patients should demand the care they deserve and take an active role in educating their physicians. Primary care physicians are responsible for managing an enormous number of illnesses and the pace of medical research and treatment advances are progressing at a dizzying rate. At the same time, patients have become well educated consumers of health care and have a better understanding about the emerging science and treatments. They can become vectors for that knowledge with the public and their physicians.

We have a program through the American Migraine Foundation website called “Find a Doctor” where people can type in their zip code which and find a number of doctors in their community who have expressed an interest in or have expertise with migraine and other headache disorders. There are close to 500 accredited headache specialists, that’s 1 for every 80,000 patients, but there are other specialists and primary care doctors who have taken an active interest and developed expertise in managing this disease.